Two guys, obsessed by history, undertake the voyage of their life: on foot from Moscow to Vilnius. They intend to follow the trace of Napoleon, more specifically of the soldiers of the Grande Armée, an international hodgepodge that conquered Moscow in 1812 just before their French leader led them into a tragic defeat against Russia.

Dimi and Karsten walk a thousand kilometers along places long forgotten by Western Europeans, towns and former battlefields with names that once were synonym for military hardship, for cold and disaster, for the rawest denial of human dignity. Four million footsteps and the beginning of a winter on unknown soil separate our self-proclaimed two-man-army from its goal. All they have is a pair of good legs, a tent and a little guitar. Oh yeah, and a pastiche uniform of a French grenadier!

So bring on the vodka! Light the campfire! Prepare yourselves for the sweet adventures and the unlikely encounters of two recreational historians with a good morale and a sack of songs, two fellows in search of one of the darkest pages in modern history. For this is... Napoleon's horror march revisited! 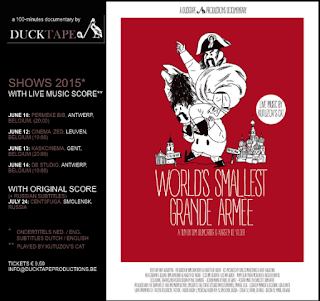 ‎"Gezellig getikt" is what they called us on thursday 13th of december at café Corsari. Means as much as "crazy but harmless". Since we never carried any weapons (an oddity for an army), 'harmless' is exactly what we wanted to be.
(Translation in Russian will be provided in due time.)

You can watch us through this link...
http://www.deredactie.be/cm/vrtnieuws/mediatheek/ookdatnog/1.1504031 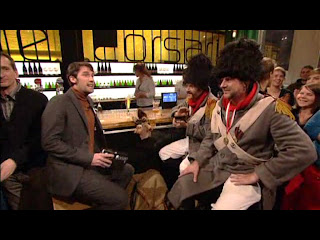 World's Smallest Grande Armee is back in Belgium, enjoying family life again. Our crazy journey has come to an end. We would like to thank all people who supported us throughout the trip, not only those who actually gave us hospitality, but also our supporters at home. You were all fantastic!!! And what to think of Karsten's sister Anne, who made these wonderful pictures!


Belgian press paid some attention to our exploit. Here is an article about us in Antwerp's Newspaper "Gazet van Antwerpen".


Here's another article, from Het Laatste Nieuws. The nice thing is that the same picture keeps coming back: with Freya in the snow! We walked in these conditions only for two days, but apparently this is the image that people want to see when thinking of a Grande-Armee-Moscow-Retreat-Re-enactment! "Oh you must have frozen to death?!" "Well... actually... It wasn't THAT bad..." 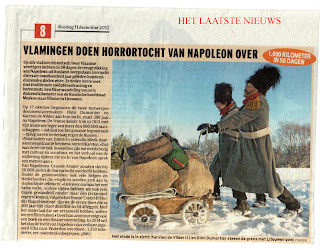 They call it a "Horror-journey". May well have been so for Napoleon and his 600.000 friends, but that's not how WE felt about the trip. The only horror experience we had was when we met this Afghan veteran. He showed us a bullet scar in his neck. Pretty scary! He was friendly at first, but he turned into an animal when after we had entered his house. Luckily Dimi had a better shot. Say no more...

Oh yeah... Tonight we'll be at Café Corsari on Eén TV! We'll post an internet video shortly, if it's available... 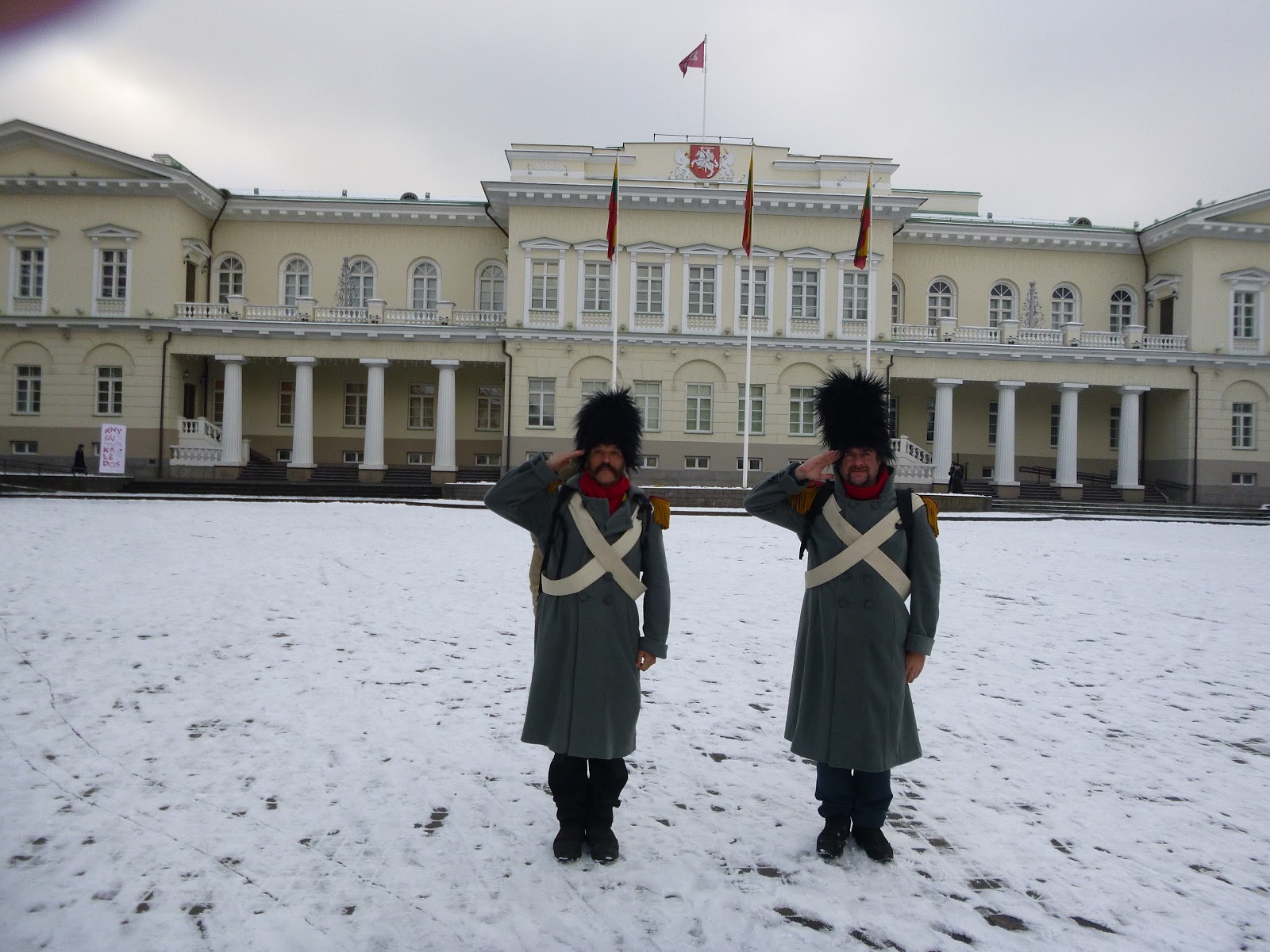 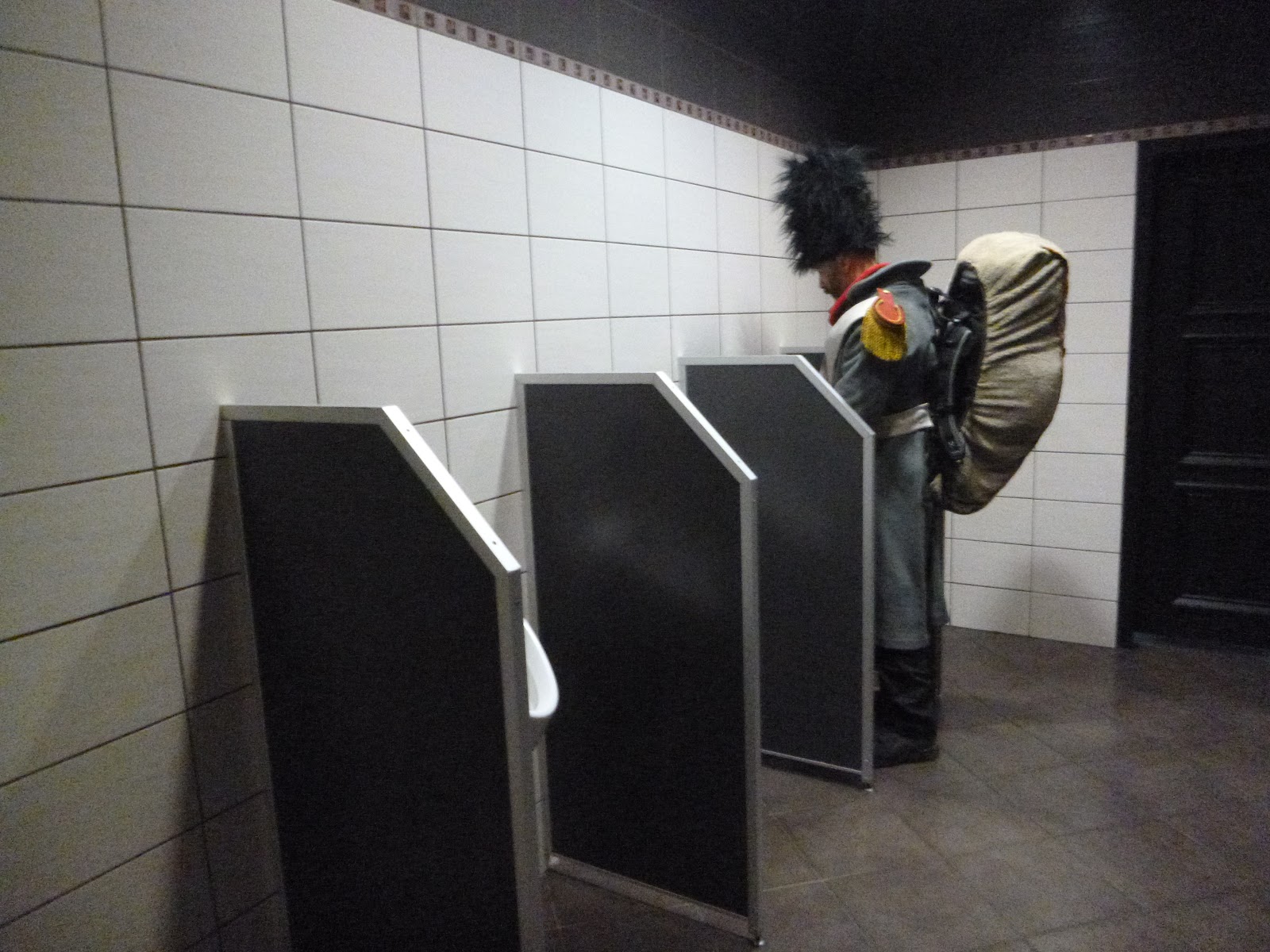 Dit e-mailen Dit bloggen!Delen op TwitterDelen op FacebookDelen op Pinterest
Yesterday with professor Jankauskas from Vilnius university faculty of medicine. He co-directed the excavation of some 3000 dead french soldiers from the Grande Armee. Here we are holding the skull of one of them, I think he was called Henri. Or was it Laurent?? 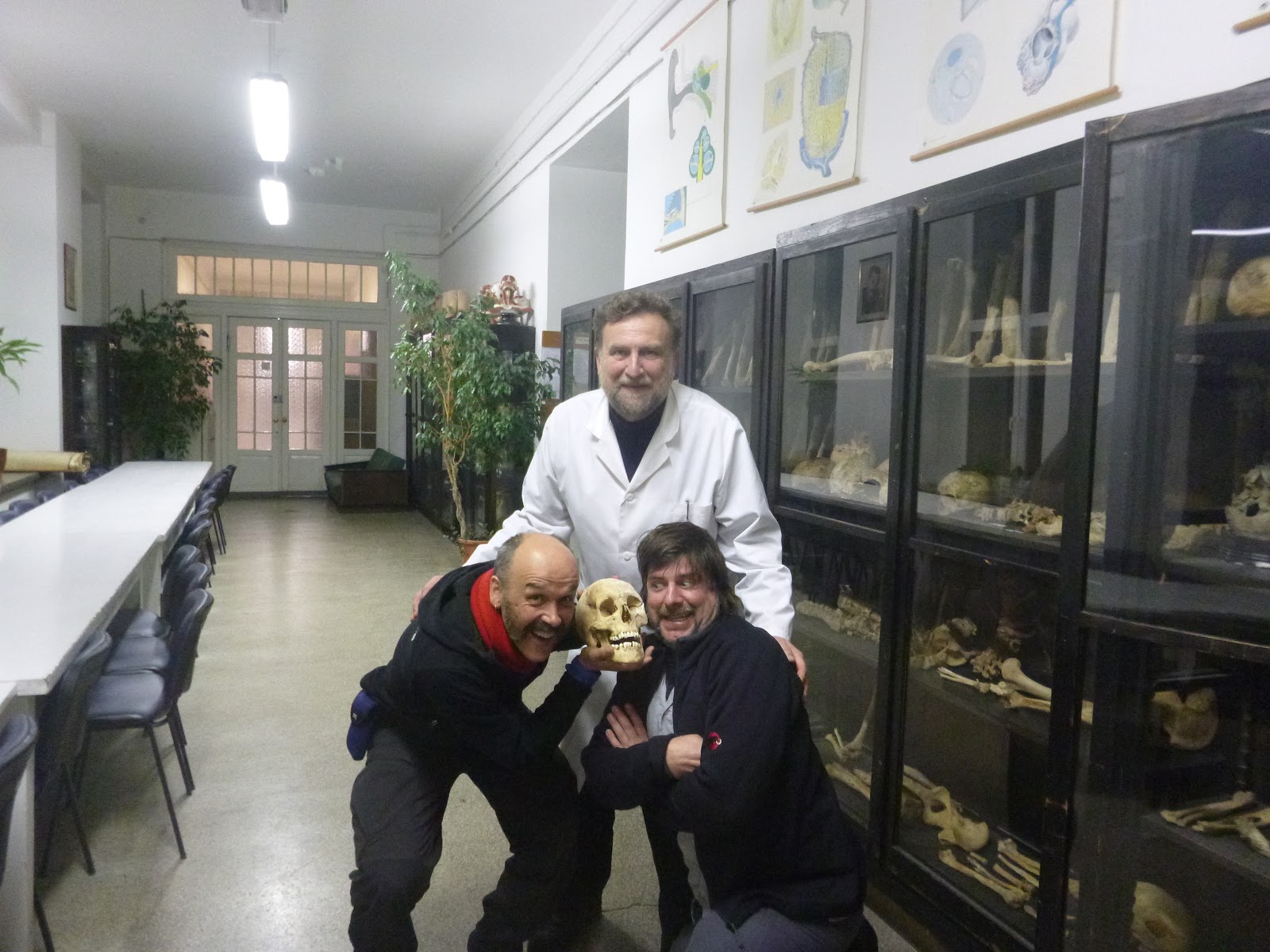 World's Smallest Grande Armee proudly announces her triumphant arrival in Vilnius, the ending point of the journey she started 50 days ago in Moscou!! The only two members of this minuscule army were greatly supported by Freya, a small carriage they found in the woods of Semlevo, between Vyazma and Smolensk, and that kept on carrying their load for nearly a month. The last days in Belarus and Lithuania were particularely difficult due to the changed weather conditions. Heavy snowfall and frost are not exactly the conditions for which Freya was constructed. But turning her into a snow sledge was too much hassle for the exhausted soldiers of WSGA. Yesterday evening Freya was parked right under the huge Christmas tree near Vilnius' Bell Tower. 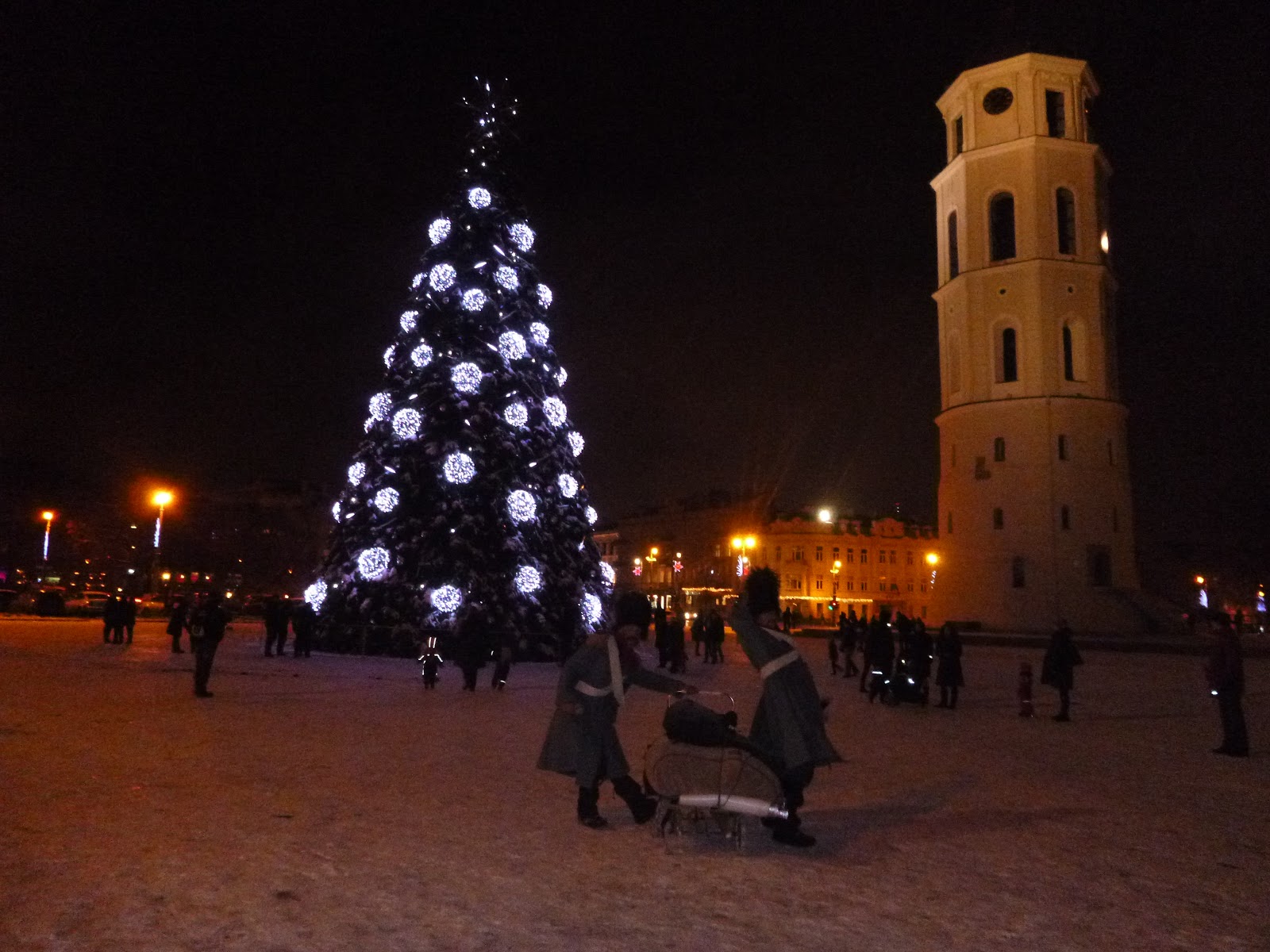 Crossing the border to Lithuania took WSGA exactly 30 minutes and aroused only smiles and handshakes of the astonished border officials. Who says Belarusian custom procedures are a drag? You'll never hear that from our side! Our luggage wasn't even checked. 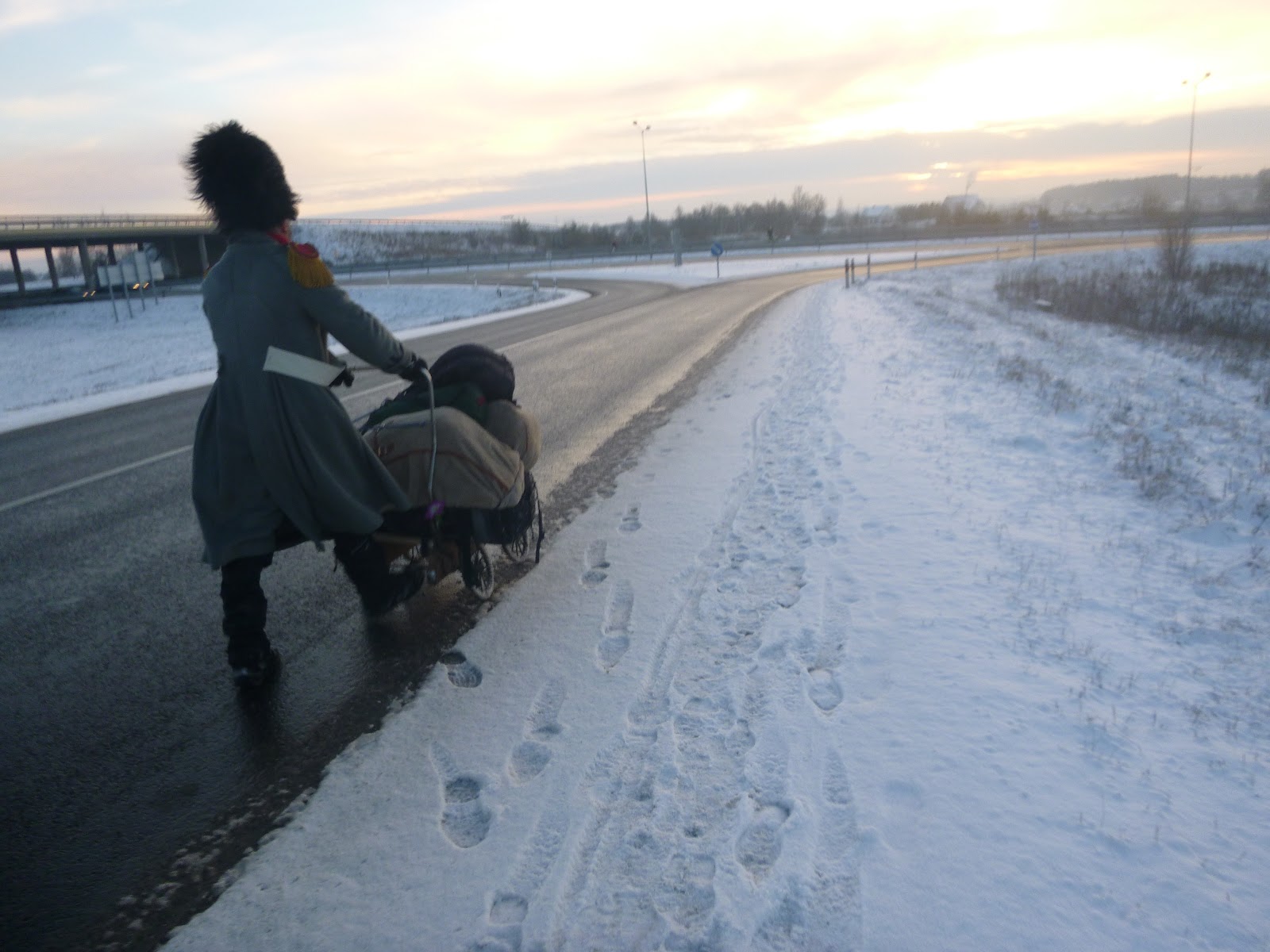 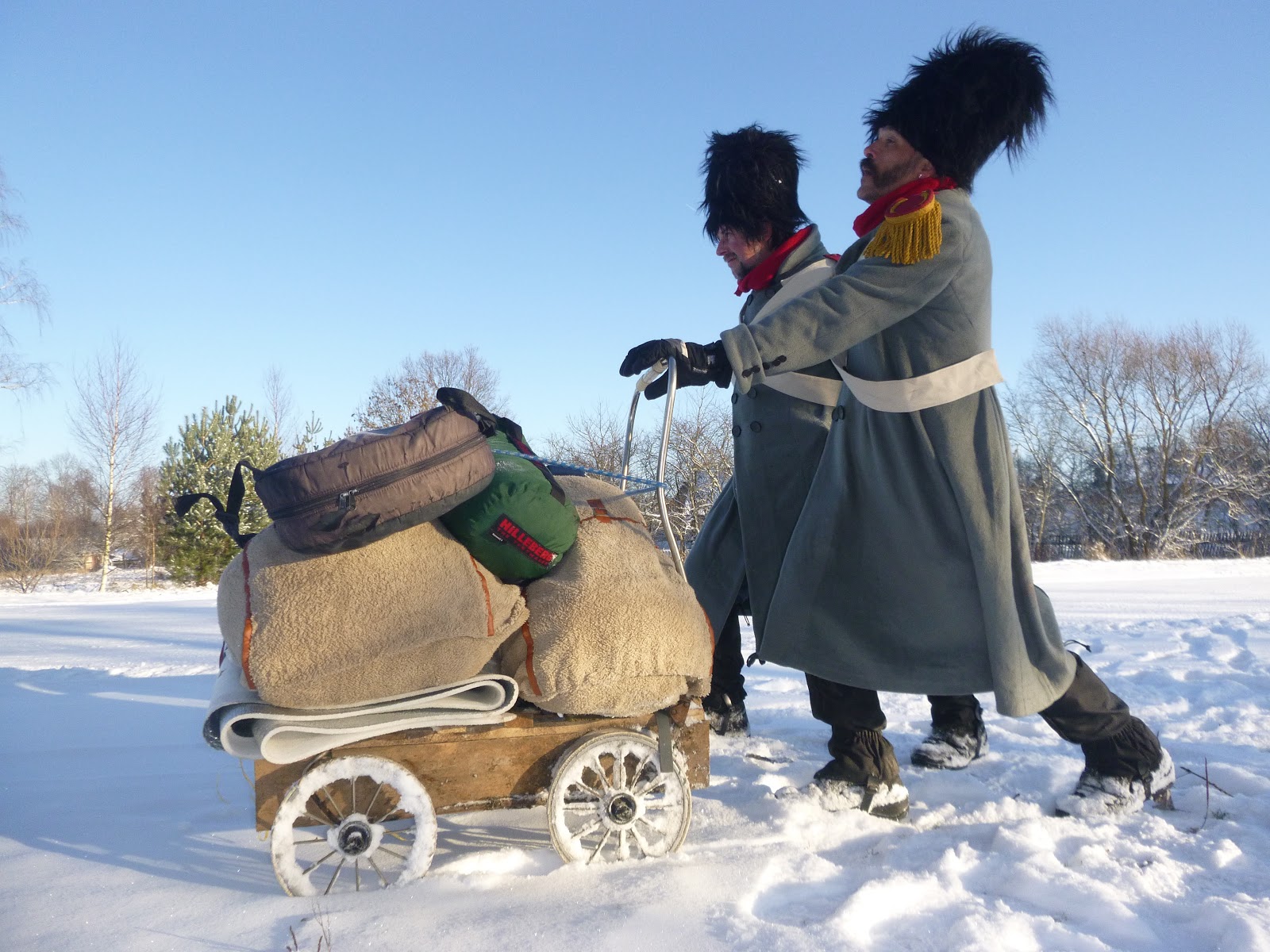 WSGA wishes to thank all the people who helped them make her journey possible. Here we are with Lucie, a fantastic Lithuanian woman who gave us shelter on our last day. 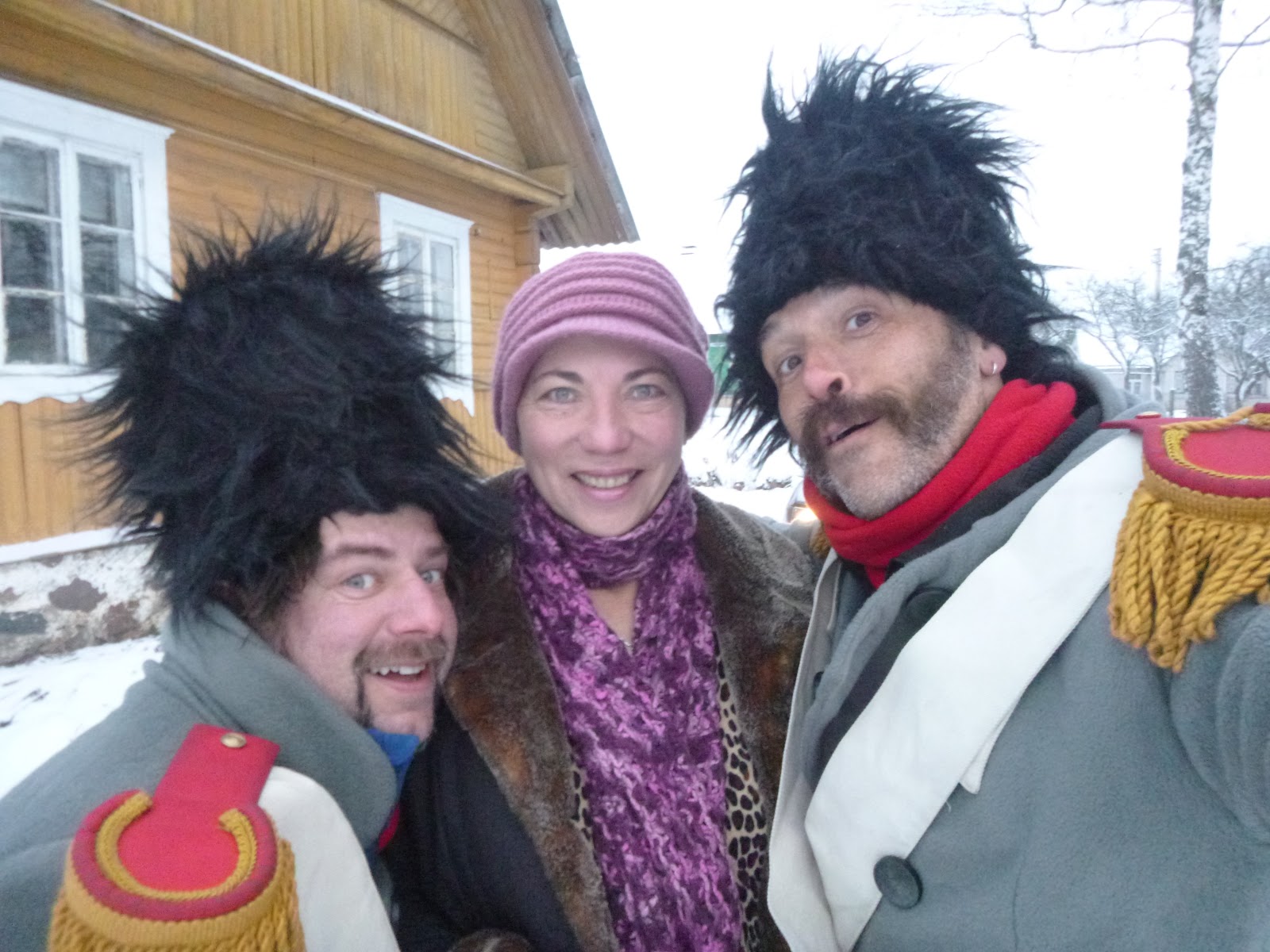 Our last busstop picknick was turned into a wonderful event by Kiryl, the second co-walker on our crazy trip. Kiryl made an extroardinary move towards the local youth, giving them a history lesson they are not likely to forget. Tomorrow's grafiti on the wall behind Dimi will certainly be nothing less than 'VIVE L'EMPEREUR'!! 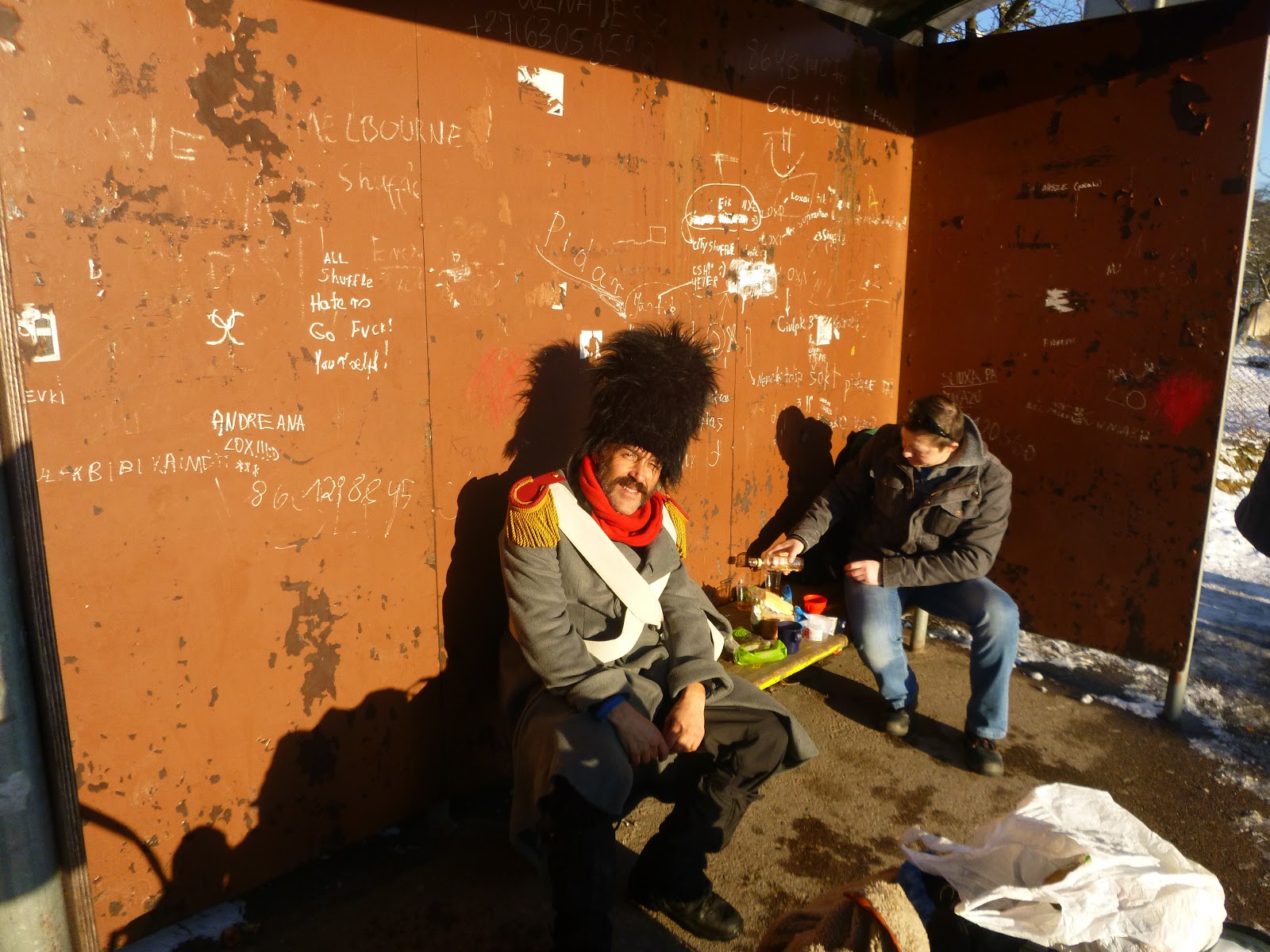 Fjodor (Theodore pour les amis) was WSGA's very first co-walker, accompanying us from Smarghon to Osjmianets. The Grande Armee's bivouacs on that stretch of road have no secrets for Fjodor, who gladly told us all the details. He even knew the exact places where the restaurants stood in those days. We looked for more modern ones to quench our thirst and hunger, but unluckily found none. Sadly, this means that business on the Grande Armee's road is going downward. 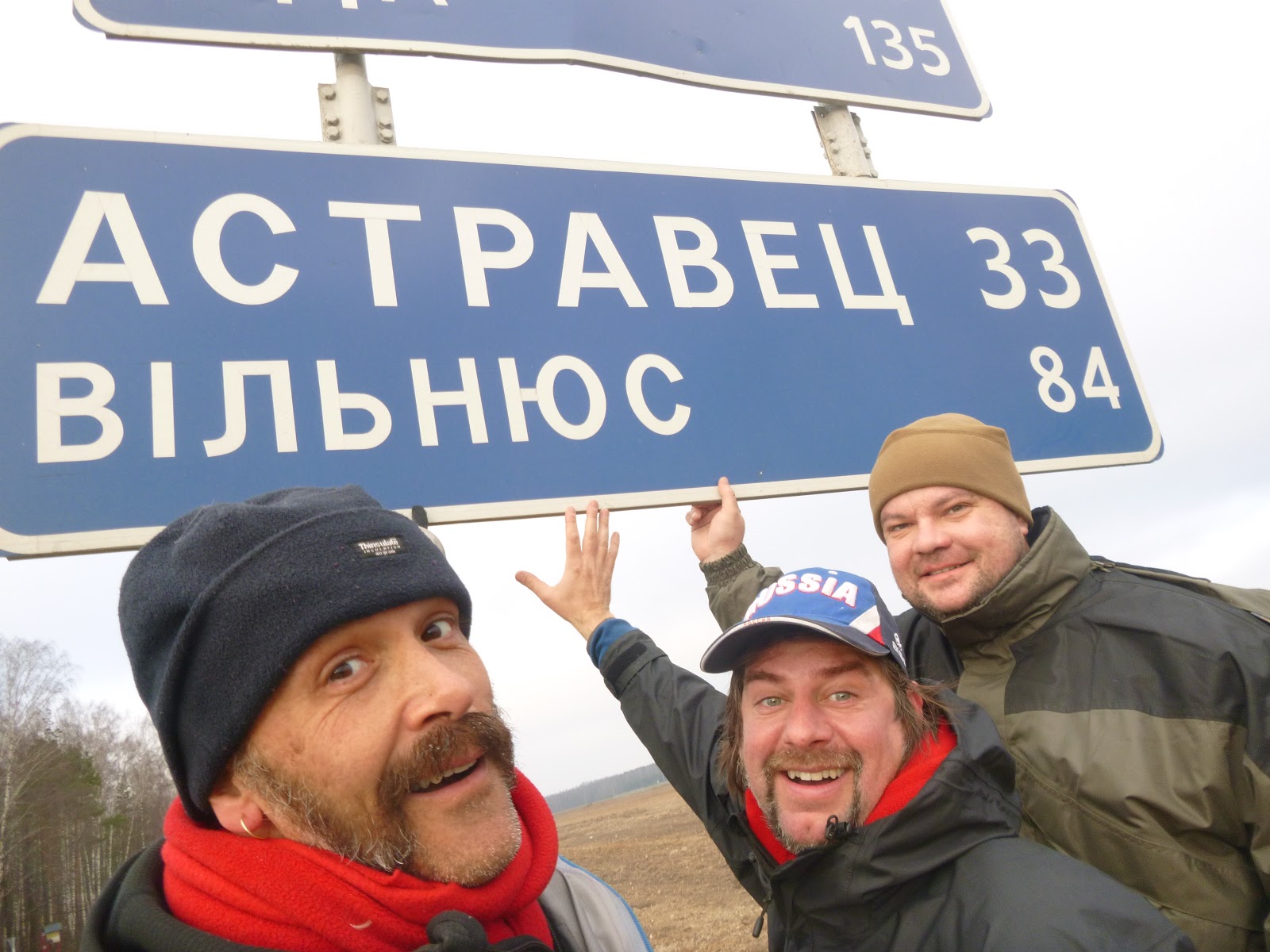 And here's one more guy we want to thank from the bottom of our heart, for he made our journey through Belarus an incredible succession of hospitable meetings and events. Anatoli (Tolek pour les amis) from Borisov!!!!!!!!!!!!! What a friend!!!!!! 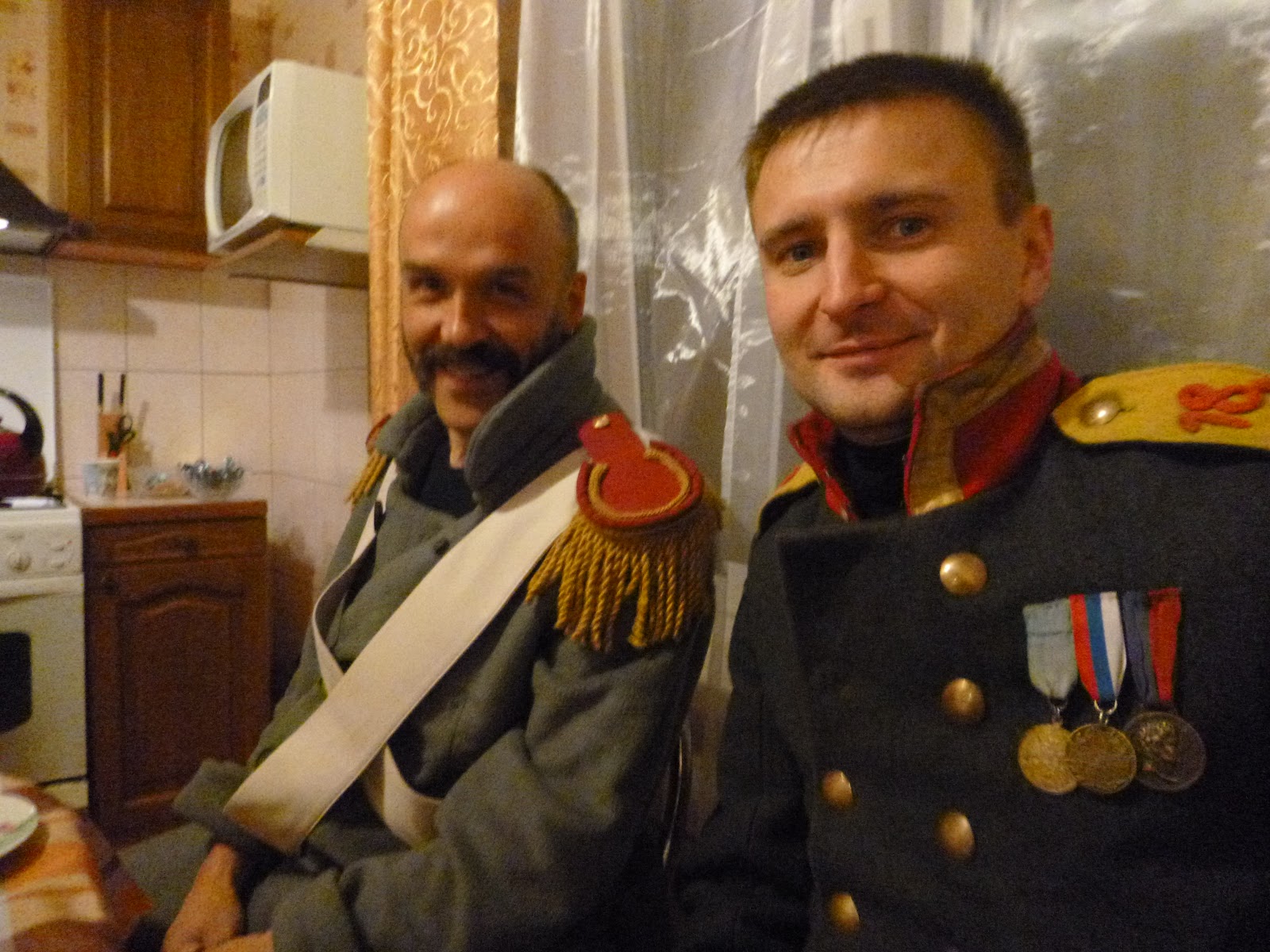 World's Smallest Grande Armee survived the battle of the Berezina. Building the bridge was the toughest part. Here we are, still wondering if it would'nt be better to take the ferry.

The day before we had been given a course in warfare by skilled re-enactors from Borisov. The T-shirts are part of the training. The hammer is not heading for Karstens head but to the rear of the cannon.

Anyway, here's an account of the battle itself. As you will see, WSGA did not pass unnoticed.

This picture of WSGA was taken the day after the battle. Unimaginable, but the snow fell overnight. It would have been so much more beautiful if the snow had covered the battlefield. Now there was no snow, and no bridges either. But great fun anyhow! Thanks to the 8ieme de Ligne who let us 'fight' in their regiment!